1895
Received pharmacy certification from the University of Budapest

1942
Position as CEO taken from him

The acquisition of the cats was not just expensive, but cumbersome?

In order to carry out an impact assessment of medicines, in 1917, an animal house was built and dozens of animals were kept on site. The only problem for working continuously was the resupply of cats, so Richter was forced to buy cats. The “We buy cats” posted on the factory door referred only to the sale of an owner’s own cat. But to no avail. The kids in the neighborhood brought the cats indiscriminately. When they handed them over, they swore that they were their own cats, but soon old ladies came because their dear kittens disappeared. Thus, the purchase of cats was not only costly, but also cumbersome. 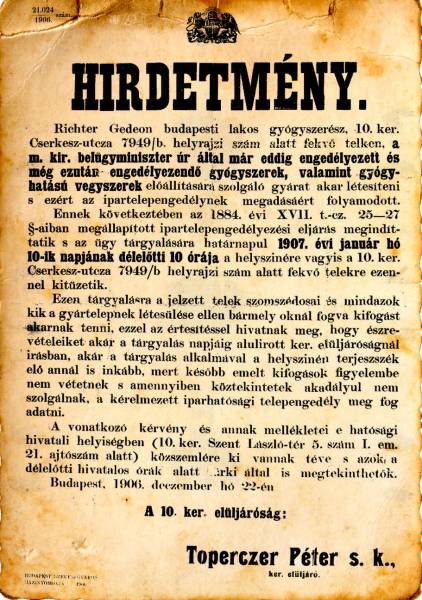 His charity was exemplary?

During World War II, Gedeon Richter helped heal patients with a number of valuable medicine donations. He has therefore received much aknowledgement from the Red Cross and other international charitable organizations. An outstanding event was the papal nuncio Angelo Rotta’s personal visit to his factory on July 9, 1943. The archbishop passed on the thanks from the Pope to Gedeon Richter for his sacrifice during the war. The event was recorded on the wall of the factory on a marble slab, but this was subsequently classified as an “undesirable clerical manifestation” and was broken. 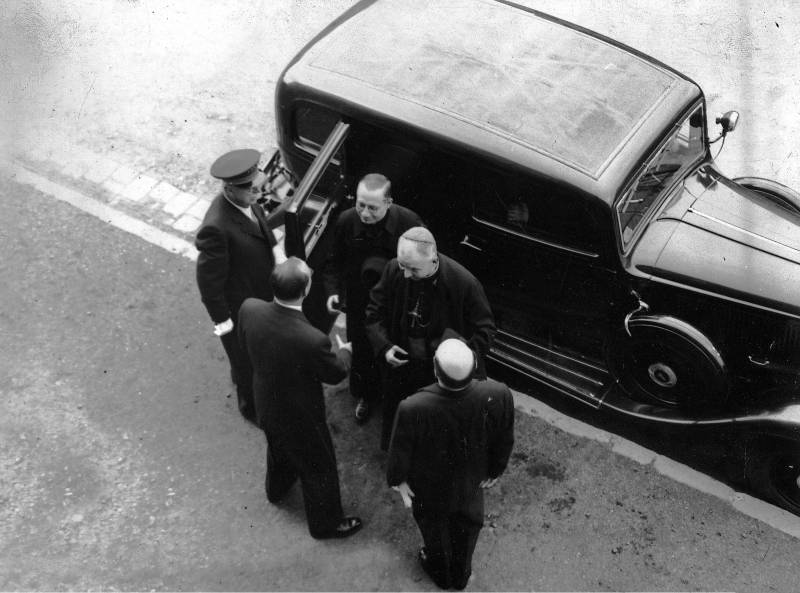 He could not leave his factory and his country?

Gideon Richter could have fled from the country after the German occupation. In June 1944, he received a letter of safe conduct to Switzerland from the International Red Cross. He did not use this opportunity: he could not leave his factory, his country. He believed he would not be hurt because he had devoted his whole life to healing patients. The head of the Mexican subsidiary, István Winkler, in the last months of 1944, realized that Richter was still in Budapest. He sent 35,000 Swiss francs for him to go to Geneva to get the papers and permits required for the letter of safe conduct. But then it was too late.

The early death of his parents also played a role in his career choice?

Gedeon Richter was raised in the Engel family in Gyöngyös. After he was born, he was orphaned. His mother died of postpartum fever; his father died of cholera a year later. As a student of the famous Franciscan High School in the city, he visited the Order’s library, where he had access to a rich collection of medical and pharmaceutical books, from recent publications to antiquity. This environment and his parents’ premature death caused by soon curable diseases may have determined his career. 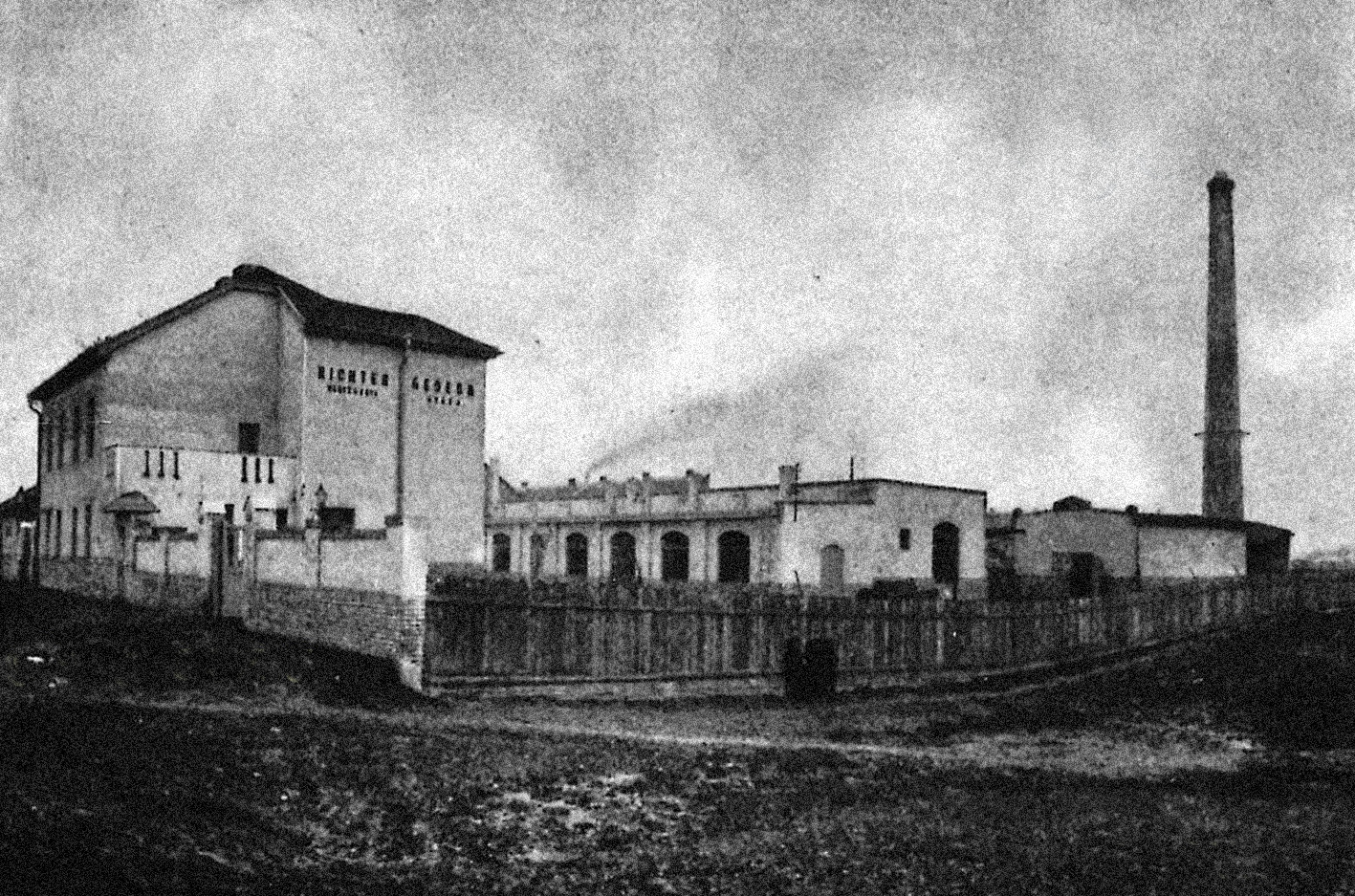 He was the first who got the “Historical businessman of the year” prize?

Every year since 2010, the National Association of Managers remembers the Hungarian business leaders and businessmen of historical significance, whose activities and socio-economic effects are still felt today. Gedeon Richter was the first to receive the memorial prize for the Historical Businessman of the Year. They remembered the significance of his figure in the scientific meeting “Gedeon Richter’s historical message: innovation”: “He was a newcomer who believed in the power of work, continuous research, development and innovation, and in fair competition, and above all in the power of the Hungarian spirit.” 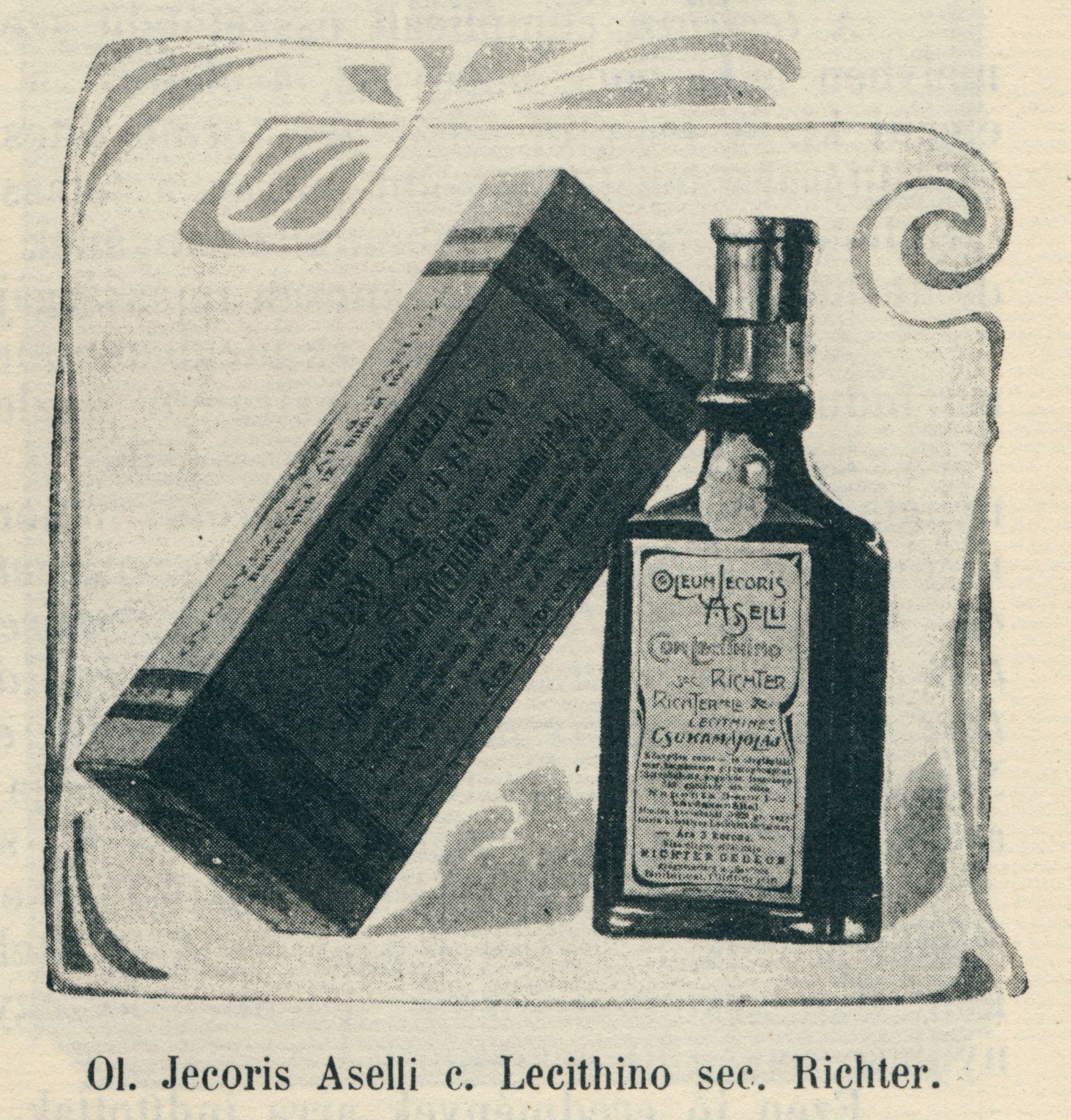 Gedeon Richter, returning from a Western European educational trip, bought the Sas Pharmacy from the family estate in Budapest in 1901 at the corner of Üllői Road and Márton Street. This became the place where the history of the Hungarian pharmaceutical industry began. In the basement of the pharmacy he created a biological preparatory and a chemical experimental laboratory. He was granted permission at the slaughterhouse to collect sheep’s thyroid glands and pig ovaries. From animal organs he began to produce and market various organo-therapeutic hormone preparations and reinforcing agents. The expansion of the pharmacy’s product range also required the patent protection of manufacturing processes and preparations. Already in 1902, he published a regularly published professional brochure called Pharmatherapeutical Information Book, which was distributed free of charge to physicians. It scientifically described the therapeutic effect of its preparations for their testing, ordering, and propagation. Growing traffic required an industrial scale expansion of production, so Gedeon Richter decided in 1906 to establish a pharmaceutical factory. 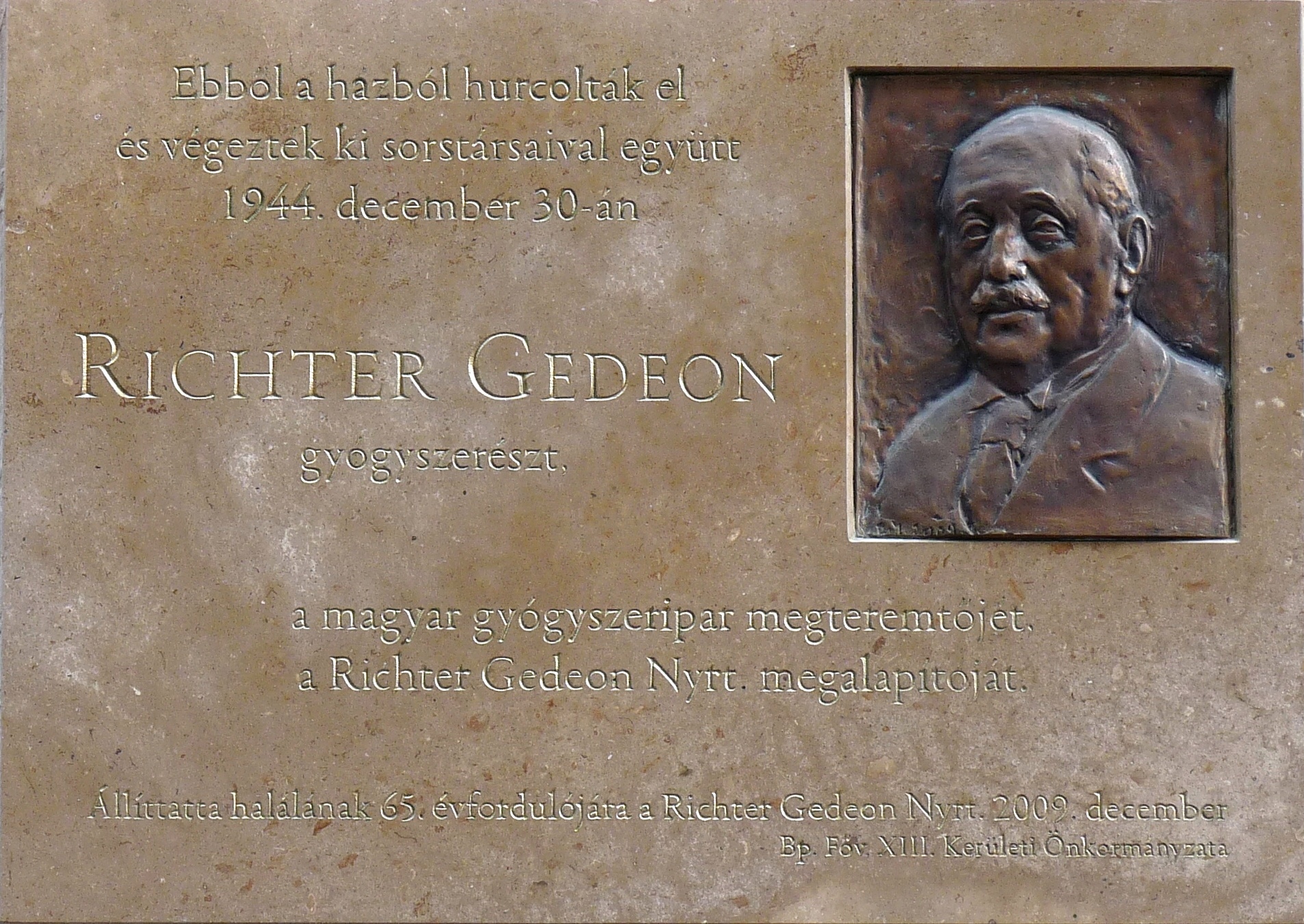 Gedeon Richter purchased a plot in Kőbánya and built his factory within a year. With this, he laid the foundations for the modern Hungarian pharmaceutical industry. The “pharmacy factory” started production in September 1907. The factory was soon recognized among the top international deliverers. His products were successful in the first Hungarian pharmaceutical exhibition held in 1911. At the outbreak of World War I, the factory already had 24 medicines. Experiences gained in the development of medicines later enabled Richter to market his hormone preparations on a competitive international level. He opened his first foreign representation in 1908 in Italy. The products of the Richter factory have been released since 1912 in Germany, the Netherlands, Italy, Denmark, Sweden, Norway, Switzerland and Asia. The growing number of foreign treaties has increased the company’s prestige so that Gedeon Richter transformed his private enterprise into a family-owned corporation.

Gedeon Richter worked out an effective export plan and decided to set up a global network. In the 1920s, he organized the first domestic industrial biological laboratory, where he produced the first synthetic estrogen at the same time as the international research in 1941. Until the war broke out, Richter’s factory products received 12 gold medals at international exhibitions. Increasing exports to Europe were affected by various import restrictions on drugs and interstate contracts, and Richter was therefore primarily targeting overseas markets. Between 1924 and 1932, more than 50 Richter representations were established. In the 1930s, to fend off the anti-import measures, the factory established subsidiaries, including in England, Mexico, Poland, and Brazil. There was significant production of pharmaceutical raw materials in these factories. Then World War II broke out, they announced the necessary industry, and in 1939 the company was declared a military operation. The production of domestic raw materials became indispensable. Between 1939 and 1944, 30 new products were marketed. From 1943, due to lack of raw material, production gradually declined and stopped at the end of 1944. 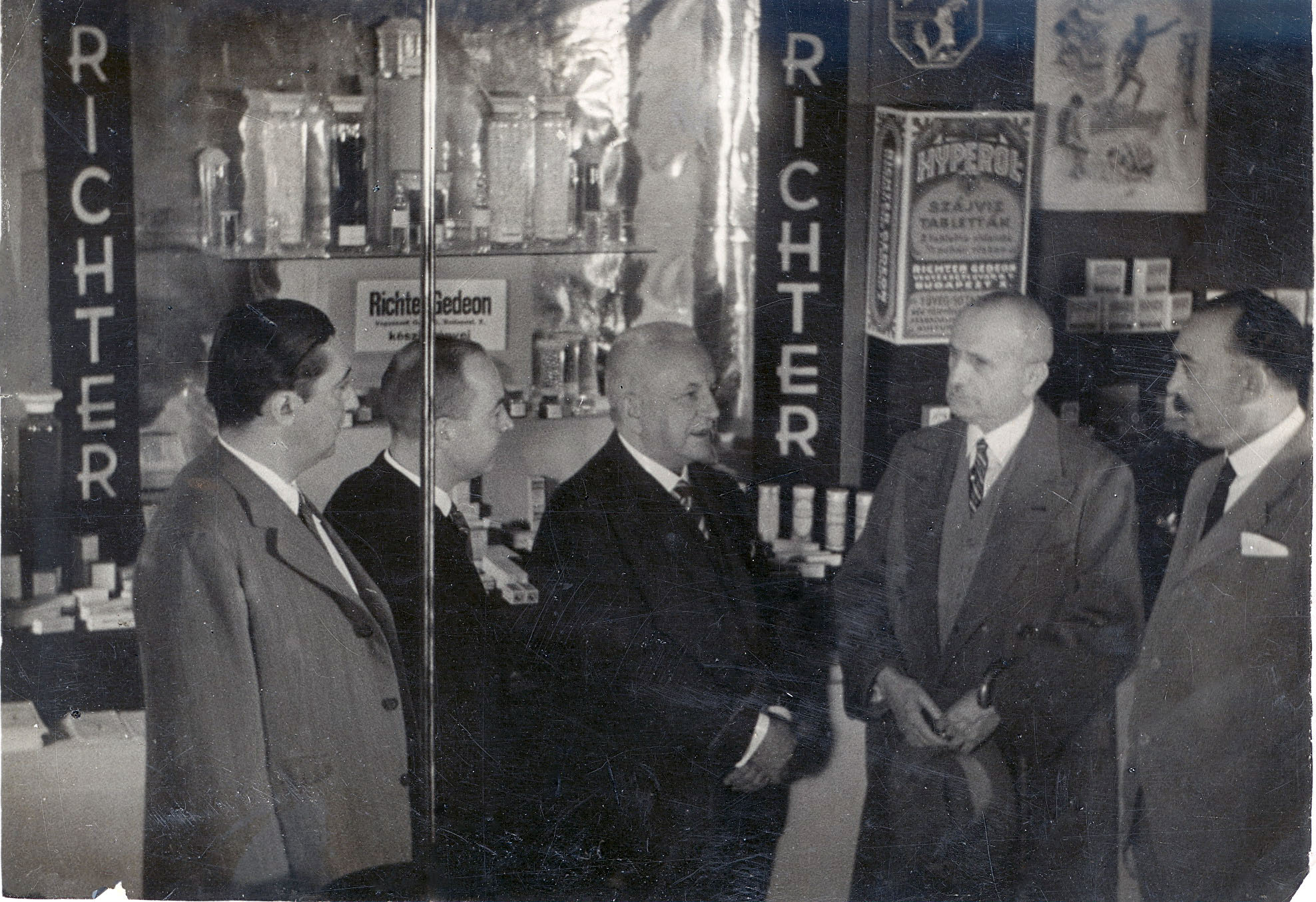 Organotherapeutic drugs can cure the deficiencies of the human organism by using agents and enzymes of animal organs. Richter noticed unfolding hormone research and new organo- and chemotherapeutic drugs during his education trip abroad. His fame gave him his the first organotherapeutic preparation, the Tonogen Suprarenale, containing extracts of the adrenal hormone (adrenaline), which increases blood pressure. Two other endocrine hormone-containing products were produced in this year, including the Thyrecid product, containing the active agent of the thyroid gland and the Ovarium, containing the active agent of the ovary. The official production of insulin produced from pig and bovine pancreata discovered in 1921 was initially launched in Richter in Hungary and was continuous until 1944. Insulin production played a decisive role in the development of the production culture of the factory. In the second half of the 1930s, Richter Co. also produced long-acting insulin. The quality of Richter’s insulin was the same as that of the highest quality foreign preparations. 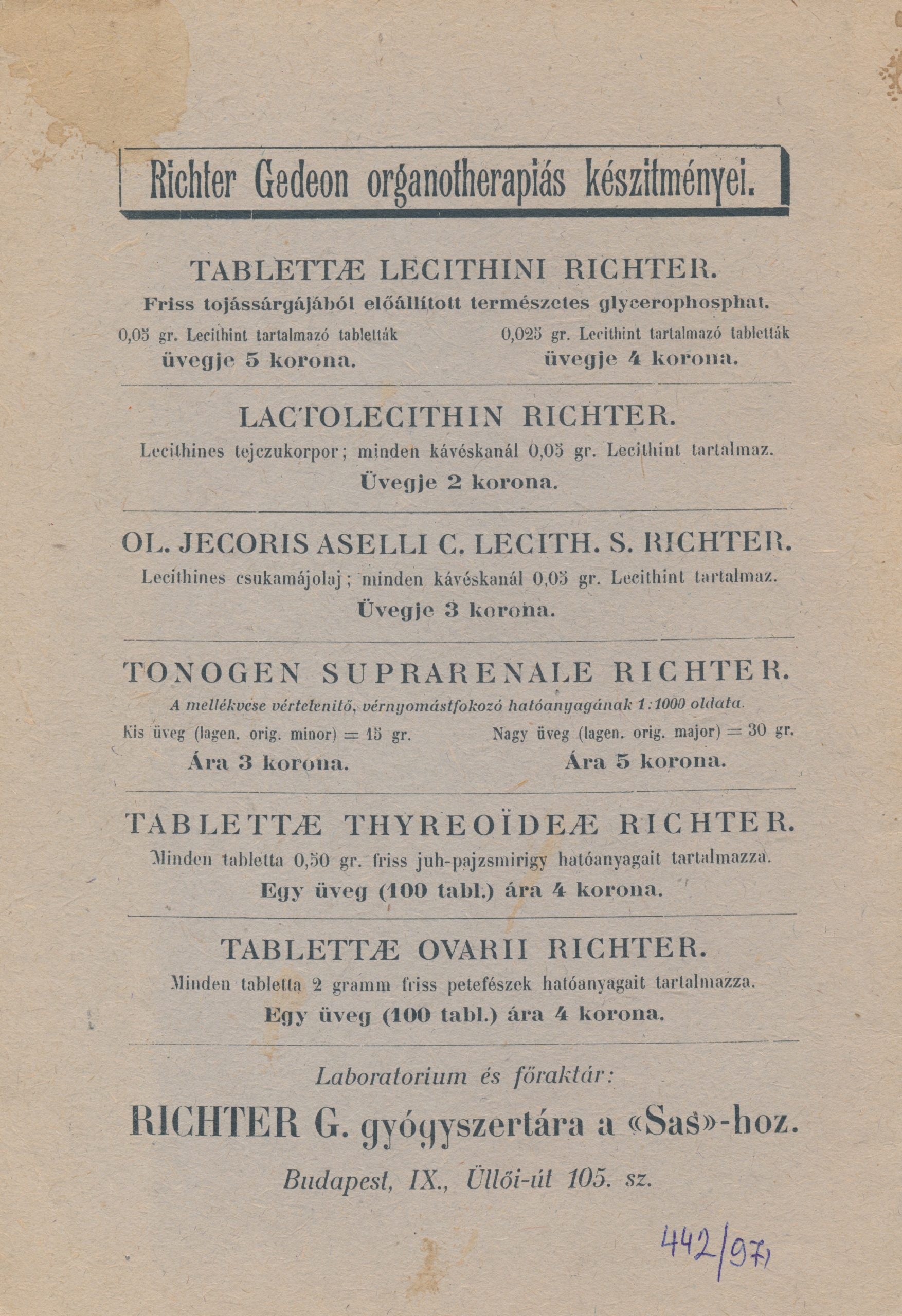 The production profile of the Richter plant expanded more and more. He acquired the production process for a number of herbal extracts and entered into cooperation contracts for placing phytochemical preparations on the market. The first phytochemical formulation was the purified extract of Adigan, a woolly foxglove leaf, followed by Ergam, the first preparation containing ergot alkaloids. As a result of the discovery of sulphonamide preparations, synthetic research evolved in the late thirties at Richter. A number of new foreign drug manufacturing procedures were developed and steroid research began. The first synthetic patent of the Richter factory was the production of lithium salt of acetylsalicylic acid. In 1912, he produced the first purified digital extract, Adigan. Richter’s first synthetic product was not a drug but the effective disinfectant tablet Hyperol, which was introduced in 1911. Hyperol belonged to basic equipment of the Army of the Monarchy during the First World War.