1900
Born on 5th June in Budapest, Hungary as the eldest of three children in the family.

1911
His first patent was the aeroplane merry-go-around at the age of 11.

1919
Converted to the Evangelical church.

1920
Studied at the College of Technology in Berlin where his professors were Albert Einstein and Jenő Wigner.

1921
Passed his examinations at the University of Technology.

1927
Wrote about transient phenomena in his dissertation.

1934
Moved to the UK and became a British citizen.

1936
Married Marjorie Louise Butler whom he lived in a harmonic marriage with, until her death.

1956
Was elected a fellow of the Royal Society.

1958-1967
Was professor of applied electron physics at Imperial College.

1968
Took part in founding the Club of Rome.

1971
Was awarded the Nobel Prize in physics.

That he was ten years old when he submitted his first patent?

Dénes Gábor, pupil, submitted his application for patent of an aeroplane merry-go-round at the Royal Hungarian Patent Office: there were several, small size, different types of aeroplanes, flexibly interconnected in a ring shape, and each was fixed to a vertical shaft in the center of the merry-go-round. The main center shaft was driven by a motor which rotated the aeroplanes in a circle. The centrifugal force on the aeroplane and the aerodynamic lift on the wings elevated the aeroplanes. 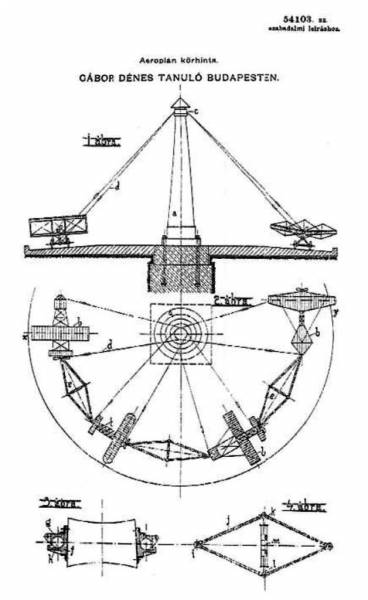 What Enrico Fermi said about Hungarians?

“Most Hungarians I have met are intelligent or quite exceptionally intelligent people. However, they like being too genuine”, Enrico Ferni once told Bálint Telegdi who worked together with several Hungarians in the Manhattan Project aiming to develop the nuclear bomb. Dénes Gábor didn’t lack genuine thinking. He luckily incorporated the characteristics which are not always possessed together even by the most talented ones: theoretical knowledge, tireless willingness for research, problem-solving skills, technical skills and the skill of creating synthesis. 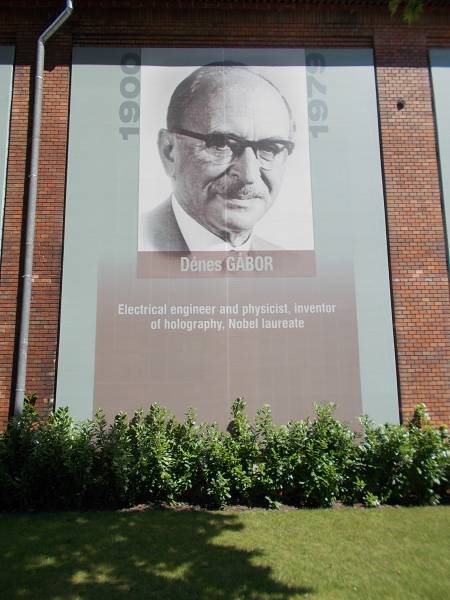 That he developed the principle of the flat screen tv set as early as the sixties?

He was a professor of the Electron Optical Department of Imperial College when he started to implement his old idea, i.e. developing the flat screen. In his innovative solution, the electron beam broken multiple times runs parallel with the screen. Since producing such television tubes required complex technology, the industry did not dare to undertake mass production. Although flat screens operating with this technology were produced later, flat screens today work in a different way. 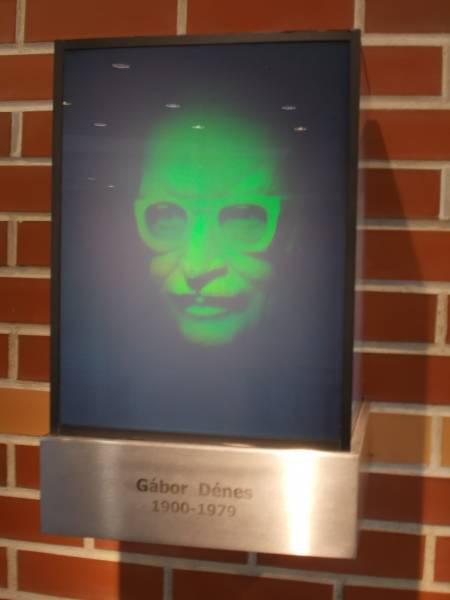 That he was always interested in the work of Hungarian researchers?

He wrote to Zoltán Bay (1948) when his paper on the perception of the radar waves reflected from the Moon was published: “Your print of the Moon has just arrived today; I immediately read it and I am in a hurry to express my sincere amazement. As an achievement in physics and technology it is at a standard which have very rarely been reached in Europe, but it is close to unbelievable adding that the calculations were done during the crash and the experiments were completed in a nearly destroyed country concurrently with the wonderful rebuilding of Egyesült Izzó. It is wonderful, how stimulating the catastrophic circumstances are.” 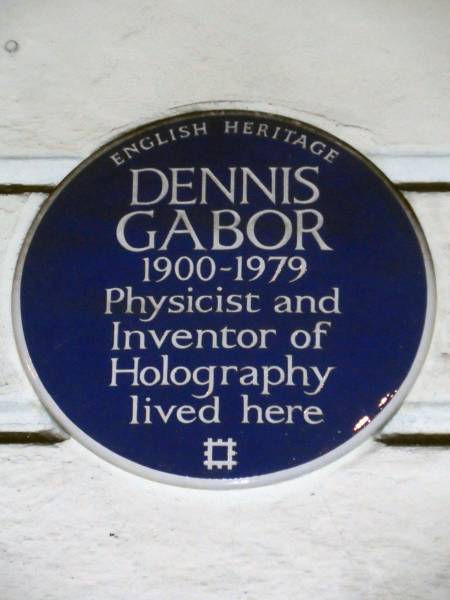 That he was strongly interested in the global problems and the future of mankind?

He took part in the work of the Club of Rome with Professor Umberto Colombo and two other co-authors he wrote the report to the Club titled Beyond the Age of Waste in 1978. This paper was a milestone in raising awareness that the age of wastage and ruthless exploitation was finally gone, and the world demands new economy and a new way of thinking. He dealt with “inventing the future” till the end of his life which had to involve the future of information technology and the global problems of information and communication. 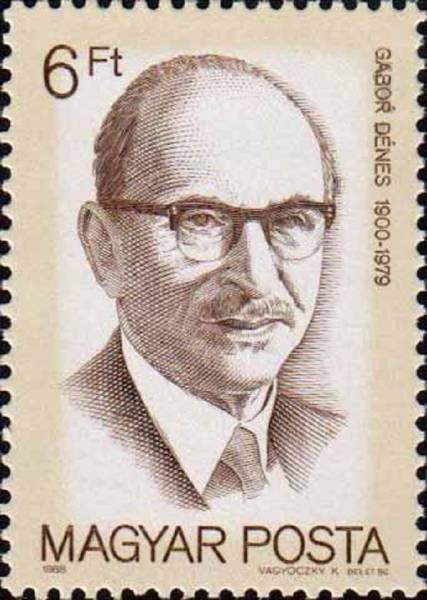 The transient phenomena occurring in high voltage networks caused lots of practical problems in the 1920’s, while neither the tools nor the methods were available for quantitative measurements. Dénes Gábor chose to research this as his doctoral project in Germany. So in the beginning of his career, he researched the network disturbances in high voltage and high capacity power lines. These mostly occurred with lightning or switching and only lasted for a few microseconds. An instrument had to be invented and the theorem had to be developed to measure these. One such instrument had already existed: the Braun-tube, developed by Nobel laureate Braun, which was based on deviating the cathode beams in electrical fields, and which served for indicating the time process of alternating currents and vibrations. Based on the principle of the Braun tube Dénes Gábor developed a high velocity, 60 kilovolt oscilloscope which worked with much stronger current, and was many times more sensitive than Braun’s instrument. He also achieved that the Kipp relays kept the electron beams bent from the direction of the axis until the arrival of the transient signal. Then, the relay was switched off upon the arrival of the signal and the electron beam became free.

The principle of holography

Holography is an imaging process based on the wave nature of light with which a perfect three-dimensional image of the structure of the subject. He found the idea of holography in relation with the electron microscope. He worked in England in the experimental laboratory of British Thomson-Houston Company, and was greatly interested in the electron microscope where the imaging distortion known as “spherical aberration” arising from the spherical shape of the lenses caused constant problems. He thought that the bad quality electron image containing all information should be corrected by optical devices. He thought that the image can be perfected if not only the intensity of the electromagnetic wave reflected from the object is recorded but the phase and the amplitude of the light wave, too. These latter two parameters carry the information about the spatial position of the object so the interference image can be formed with these from which the original image of the object can be reconstructed which he called hologram. Since their subsidiary, Metropolitan Vickers manufactured electron microscopes, Gábor was permitted to perform a few optical experiments which played a significant role in the success of holography later. Unfortunately, good quality, coherent light sources did not exist at that time so the experiments of Dénes Gábor only resulted in limited quality images (holograms).

Dénes Gábor taught and researched at Imperial College for 18 years (1949-1967), until he retired. He taught electron optics and then, he was professor of applied electron physics. After that, he was one of the leaders of the institution and an advisor from his retirement until his death. He continued his research in the fifties and sixties in electron optics and started to further develop his former plasma theory – meanwhile, he developed the magnetron theory, constructed a Wilson cloud chamber (in which the speed of particles can be measured), built a holographic microscope and started to implement his old plan to develop a flat screen. In his innovative solution, the electron beam broken multiple times runs parallel with the screen. Since producing such television tubes required complex technology, they were not yet ready for mass production so he couldn’t find a manufacturer. Although flat screens operating with this technology were produced later, flat screens today work in a different way.

Fields of application of holography

The essence of hologram imaging and reconstruction: the waive front is appropriately recorded in a given alignment and reconstructed with the recorded interference image and let further which started from the object and contains the information of the three-dimensional image of the object. When laser became available in 1961, Emmeth Leith and Juris Upatnieks, who read Dénes Gábor’s paper, prepared and presented the first three-dimensional holograms with the help of laser, “for mere curiosity”. Everyone sees the most common form of application of holograms, the security marks (CDs, banknotes, credit cards). These are virtually impossible to counterfeit because a perfect copy of them can only be produced with the original hologram. Holograms are marketed as decorations, pieces of art but perfectly true, large, color holograms are also made as well as motion pictures, so called holofilms. Since they contain much more information than traditional three-dimensional images, they are much more widely used and provide much more opportunities. Some examples: ultrafast photography, 360-degree holographic image, holographic filming possibility, application of holography in the world of atoms.

Dénes Gábor was awarded the Nobel Prize in 1971 “for his invention and development of the holographic method”. However, at the peak of his professional success, he stepped forward to the world problems of mankind. His attention was taken by the life and future of mankind from the sixties. The following works present this: Inventing the Future (1963), Innovations: Scientific, Technological, and Social (1970), The Mature Society. A View of the Future (1972) as well as his work in the Club of Rome. According to his view, science must face two great problems. “One is a problem of prediction: how long may things continue as they are now. The second is a problem of invention: how can we prevent disaster.” He talks about these works of his as follows: “Now that my future is mostly behind me, I am passionately interested in the future which I shall never see. However, I hope that my works contribute to a smooth transition to a really new era.” His classic statement was: “The future cannot be predicted, but futures can be invented.”